Please use the phonics progression or scope and sequence for the program that you are using. 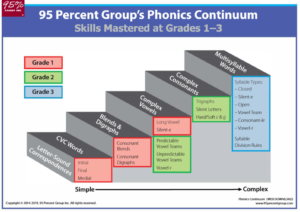 The following is a typical phonics progression:

Also known as double agents or misbehaving letters, these letters make decoding challenging.  Helping students  understand and identify these letters will strengthen decoding skills. It is important that the concept of schwa is introduced early, as high frequency tricky words/red words contain schwas and are challenging for emergent readers.

A syllable is a word or part of a word with one talking vowel sound.  Closed syllables end with a consonant (closing off the vowel) making the vowel short. An open syllable ends with a vowel (making it open), which is long.

The Floss Rule guides students in when to double the f, l, s or z at the end of a word.

Hard and Soft C and G

The general rule is that g are soft when they are followed by e, i, or y. Hard and soft g should be taught before the Soldier Rule dge.

Doubling The Final Consonant Before a Suffix

When do you double the final consonant before adding a suffix? There are patterns and rules that will support students with this decision.

Y makes a long i or e sound