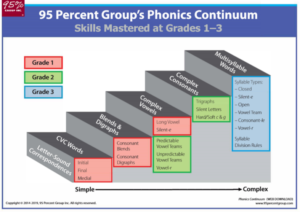 Syllable Rules are introduced as early as grade one and as late as Grade 3.  A syllable rule impacts whether the vowel is pronounced as a long vowel or a short vowel. Certain syllable rules are dependent on the understanding of other types.  For example, students require a knowledge of open and closed syllables in order to fully understand Silent e. Spelling screeners will often show where students have unfinished learning around these concepts, even though students are able to fluently read them in print.

While there is no hard and fast rules regarding the order of introducing syllable rules, if you are introducing the 6 Syllable rules for the  first time, we recommend using the order presented below. If you are doing reading intervention/remediation, it is important that a word reading and spelling screener are administered to pinpoint unfinished learning.

We recommend that when teaching a concept, all components of the lesson are addressed with explicit instruction. Each lesson is structured in the following way:

A syllable is a word or part of a word with one talking vowel sound.  Closed syllables end with a consonant (closing off the vowel) making the vowel short. An open syllable ends with a vowel (making it open), which is long. Open and closed syllables are introduced early in reading instruction but since they impact syllable division and how parts of words are pronounced, they need to be revisited for syllable work in decoding longer words.

Vowel Teams are two vowels or a vowel/consonant combination that makes a long vowel sound. Some vowel teams always make the same sound, whereas unpredictable vowel teams can make more than one sound.